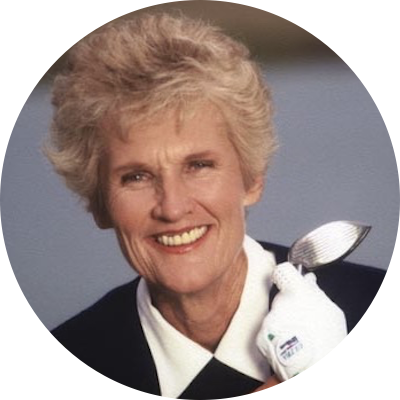 It is one of the most famous records in golf: 88 victories over a span of 23 years, an average of 3.8 victories per season starting with the Kelly Girl Open in 1962 and ending with the United Virginia Bank Classic in 1985. In those three decades, Kathrynne Ann Whitworth surpassed the victory totals of Mickey Wright (82) and Sam Snead (82) to lodge herself atop the category of Most Tournament Victories By a Professional, Man or Woman.

Whitworth did this with what she considered average talent. “I never had a golf swing,” she said. But she did have staying power. From 1963-1973 she was leading money winner eight times, second on the money list twice and third once. In that span, she won the Vare Trophy and Player of the Year honors seven times each.

“I’m not some great oddity. I was just fortunate to be so successful. What I did in being a better player does not make me a better person. When I’m asked how I would like to be remembered, I feel that if people remember me at all, it will be good enough.”
Whitworth passed the seven-figure threshold at the U.S. Women’s Open, the one Major Championship that eluded her. “I would have swapped being the first to make a million for winning the Open, but it was a consolation which took some of the sting out of not winning.”

Born in Monahans, Texas, Whitworth grew up in Jal, New Mexico, where her father owned a hardware store. She got her first set of clubs from her grandmother and started playing golf at 15. Two years later Whitworth won the first of two consecutive New Mexico State Amateur titles.

Her start on the LPGA Tour was less than auspicious. She played 26 events as a rookie and made less than $1,300. After playing so poorly, Whitworth considered quitting, but a visit to Harvey Penick convinced her to keep going. Self-conscious and shy, Whitworth was adopted by Wright, Betsy Rawls, Gloria Armstrong and Jackie Pung. She soon gained confidence in herself and her ability.

“When I won eight tournaments in 1963, I was living on a high,” Whitworth said. “I got in a winning syndrome. I played really well and it came easily. You don’t think you’re that great, but you’re in the groove with good concentration. Nothing bothers you.”

Whitworth qualified for the LPGA Hall of Fame in 1975, but the stress of playing at such a high level for so long eventually took its toll. She described the 1974 and 1975 seasons as “traumatic,” and in the late 1970s, her game deteriorated. Only the pursuit of the $1 million barrier and the records of Wright and Snead kept her going.

Victory number 82 came in the 1981 Kemper Open. She passed Wright the next year with a victory at the Lady Michelob. She won once in 1983, when she made a 40-foot putt on the 72nd hole of the Kemper Open. With one last push, she won three times in 1984 and again the following season. At that point, she assumed responsibility as the LPGA’s vice president and ultimately its president.

“I don’t think about the legacy of 88 tournaments. I did it because I wanted to win, not to set a record or a goal that no one else could surpass,” she said. “I’m not some great oddity. I was just fortunate to be so successful. What I did in being a better player does not make me a better person. When I’m asked how I would like to be remembered, I feel that if people remember me at all, it will be good enough.”

World Golf Hall of Fame member and the winningest player on any Tour ever, Kathy Whitworth, begins her remarkable story by sharin…